Taxidermy is defined as the art of preparing, stuffing, and mounting the skins of deceased animals for display. The word taxidermy is a Greek word, literally meaning arranging skin, taxi meaning arrangement, and derma, meaning skin. By just reading the definition of taxidermy, it may seem like quite a morbid practice, yet, it is still practiced around the world to this day. People choose to mount the skin of dead animals for a variety of reasons, the most common being to display animals as hunting trophies. Taxidermy is also used for the purpose of studying a species, and simply to preserve your beloved pet.

Although most people would not want their loved ones to be taxidermied, it is still being investigated as to whether the idea of human taxidermy is possible or not.

One of the mai 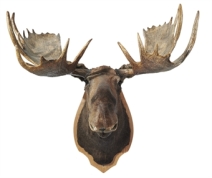 n reasons as to why human taxidermy is not ideal is due to the effects it would have on our skin. When the skin is preserved, human skin is known to discolour quickly. When preserving animal skin, this is typically not a problem as most animals have fur or feathers to cover the discolouration of the skin underneath. Human skin also becomes uneasy to work with as it becomes stiffer than animal skin. A taxidermist would have to use different tools, such as paints in order to make a taxidermied person look human. Because the idea behind taxidermy is to make a deceased animal look lifelike, this is process would not be ideal. This makes the process of human taxidermy difficult.

One of the few known instances of human taxidermy was in the 1800s was the “Negro of Banyoles”, a controversial piece that was previously a major attraction in the Darder Museum of Banyoles.

As you can see from this picture of the “Negro of Banyoles”, the piece does not appear to look lifelike whatsoever.

The body was brought to the museum in 1916, and went without question until 1991, where the body was requested to be removed. The remains of the body were then sent to Botswana for proper burial.